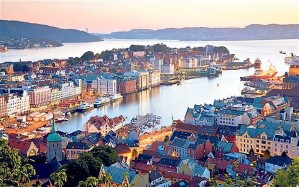 We as Americans already thinks it’s a hassle to include recycling into our lives so imagine cutting out the use of cars. There would probably riots in the street with people saying that it is our right to own and utilize cars and that it is not the job of the government to take away our possessions. That is all very true, but what about when our luxuries are affecting the health of the environment and the world around us. We only have one world and one home. Norway’s capital will ban cars from the city center within four years, part of a plan Oslo politicians announced Monday that calls for drastically reducing carbon emissions and cutting car traffic by a third in the next 15 years. Some people would say that Norway is reaching for a big step, but in reality they are starting small but powerful in attempting to make this change with their capital. The population of Oslo is 1.3 million, the most populated city in Norway, which means that if this plan works for the biggest city it can work for the rest of the country even though the other cities in Norway are not letting out so many fossils fuels into the atmosphere as Oslo is. Now if Oslo could be able to achieve this goal, then maybe the neighboring will catch on and then the domino effect will take place. Norway is actually currently one of the countries is Europe where they have a trash shortage because of the amount the country recycles. The reason that they need this trash is that European countries depend highly on trash to burn it and produce energy. Their trash shortage is so high that their neighboring country Sweden actually helps out Norway with their trash supply. Knowing this, it makes even more sense to just cut out a huge source of fossil fuels from the country. Despite efforts to address climate change, Norway has struggled to control pollution and has repeatedly exceeded annual emission targets. Road traffic is the country’s largest source of air pollution; Many people use cars with studded tires during winter months, which emits up to 100 times more pollution than driving cars with regular tires, the Norwegian Environment Agency wrote last year. To hit its ambitious benchmarks, the city will invest in alternative transportation. On the public transit side, the plan calls for building an underground subway line in the city center and replacing buses on the busiest routes with trams. There will be nearly 40 miles of new bike and pedestrian paths and incentives for purchasing electric bikes.

One thought on “#6: Carbon // Energy focused adaptation and mitigation Strategies”